Robert and his Biggest Fear 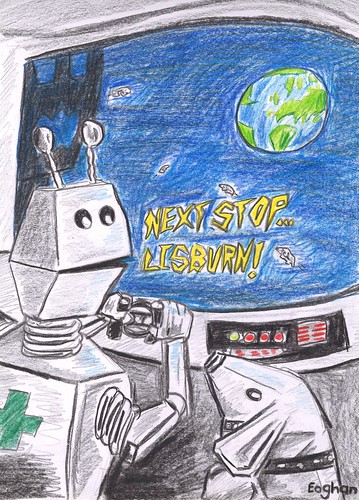 Robert came to help the planet Saturn, that was full of robots, because Victor was going to their planet to wreck it. So he tried to make a different planet called Rotopia.

He couldn’t make Rotopia, so he made a new home called The Clockhouse on Saturn.

Rex the robot dog had pups and they started to fly. While Rex’s pups were flying about, Rex tried to build Robert a rocket.

Rex called his pups to help build the rocket. While they were building it, Robert was thinking about his wish. His wish was to meet the people who made him in Lisburn.

Last night, Robert was woken by a strange noise. Rex came in and said, ‘Robert, your rocket is ready. Now you can go and meet the people who made you.’

Rex went out of the room and then the giant robot monster Victor scared Robert away. And then he flew to the people who made him…