Skip to main content
Home Stories One Story, Many Endings

One Story, Many Endings 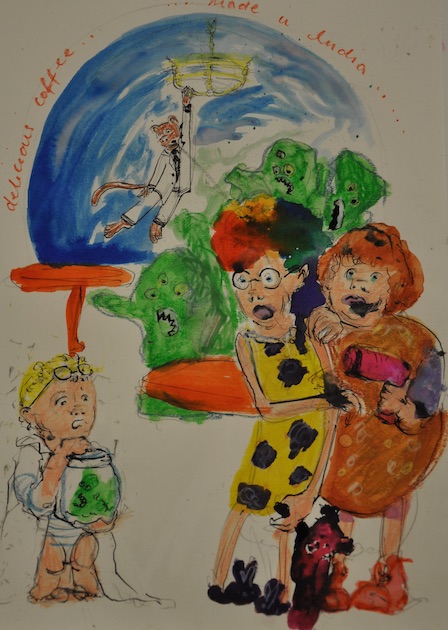 Prologue   6000 years ago, five fearsome beasts were destroying the world. A team of five heroic children captured them each in a bottle and buried them in the soil. Legend has it that 6000 years after, lightning will strike the Ministry of Stories and the monsters will take over again…   * * * * *

It all began in Hoxton at 10:21pm, in the peaceful green park. It had a smoky smell and a feel of raindrops dripping off the roofs. Everyone we knew was there, dealing with the chaotic circumstances. They all knew they were about to be eradicated. The cars were crashing into each other, everything was exploding and everyone was crying like screaming babies. (It was kind of embarrassing, actually).

The monsters were green and gooey, rampaging across streets. They broke into the Ministry of Stories and took all the bloodsucking sweets.     A human called NoName was sleepwalking into her Mum’s bakery from her house upstairs. The monsters were hungry so they went up to the bakery. They got angry because NoName had eaten all of the sugary doughnuts, salami sandwiches and chocolate sponge cakes. They clutched NoName’s wrists and dragged her up the stairs to the roof. Hearing the screams of NoName, her friends RTTRH21 (a three-headed robot) and Kitty Cookie (a geeky human) rushed to her rescue. The monsters were drooling with hunger.

Kitty grabbed NoName and they ran down to the car park. They knew they had to leave Hoxton and started to think of an idea of where to go. However, getting away was a problem. They had to choose a vehicle that’s best suited for the mission.    They used KMRCLCCT, Kitty’s Magical Random Cute Low Rider Cannon Cat Thingy, because it was cute, quick and had high tech security and protection. It also had a car summoner, in case there was no transportation when they reached their destination. Kitty sat at the front and started driving the KMRCLCCT down the chaotic street of Hoxton.

As they started their run up, they noticed they hadn’t selected the place they wanted to go within the 30 seconds, which meant that they could be teleported to a random place. Kitty blended in, but NoName was so scared she hid behind the back seat of the KMRCLCCT.

There was a baby who was a scientist called John. Him and Apu were best of friends. One day, Apu and John were walking into the coffee shop when they saw a dog wearing a pink shirt. The dog was for sale for six million rupees. They wanted to buy him.  NoName and Kitty Cookie were inside the coffee shop. They saw Apu and John outside.  “Where are we?” said NoName.  “India,” said Kitty Cookie, seeing the sign.  Apu came over. “Welcome,” he said.

“Oh Lordy, a talking monkey!” said Kitty Cookie.  “Let me introduce my friend,” said Apu. “This is John the baby scientist.” “Goo goo, gaa gaa,” said John.  “John says nice to meet you,” Apu translated.  “I need a cookie,” said Kitty Cookie. Apu went behind the counter to get her a cookie. Suddenly a green bit of goo oozed out of the KMRCLCCT, which was parked outside the coffee shop.

One of the monsters had escaped out of Hoxton and come with them to India! Apu screamed and said, “Oh my Lord, my coffee!”   NoName and Kitty Cookie kept quiet. They didn’t want Apu to think that they had brought the monster with them. Apu decided to distract the monster while John put it in a jar to experiment on it in his secret laboratory.  They went to the laboratory which was in the kitchen of the café. They had to go through the store room and pull a special lever. The door opened onto John’s secret laboratory. It was glowing and there was fog inside.  John put the monster in a big tube and started running tests on it.

NoName and Kitty Cookie were in the corner, looking mysterious. After John finished the tests, he was putting the monster back in the jar when he dropped it and the monster bit him.  John had just found out that when one monster dies another monster is born. He looked at his hands and saw they were turning green!  “Goo goo, gaa gaa!” shouted John.  “Get the blue potion!” shouted Apu.

Kitty Cookie and NoName ran to the blue potion on the top shelf above the desk. There were two containers, so they took both. They handed them to John. John knew exactly which one was which, so he drank the right one just in time.  “Let’s get back to Hoxton,” said NoName. “Come with us and save London!” “Goo goo, gaa gaa!” said John.  “Okay, let’s go!” said Apu.