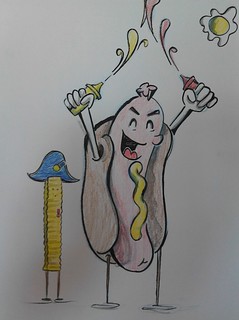 There were cocktail sticks flying through the air and pieces of tomato coming off catapults. It was midnight in Hot-Dog Kingdom and that was the only thing that was normal; there was a ginormous battle coming on.

The moon was an egg shining down on the battle between hot-dogs and burgers.

“Chip two, three, four! Chip two, three, four!” shouted Sir Chip-a-lot, the army general. “Chip along there.”   The chips were pulling a canon of vinegar and baking soda to shoot at their enemies, and boats made out of hot-dog baps were bringing troops of cocktail sausages across Lake Coke. Burger King felt scared.

“I do not know what to do!” said Burger King.

“We could gang up with the chips and defeat the hot-dog army, and then make them our slaves,” replied Fried Fred, a small crunchy chip who was a spy for Burger King.

“Or, we could let me pigs work their magic,” squeaked Uni-Pig in a sinister French accent.