Eoin the Great Magician and the Adventurer Arianna 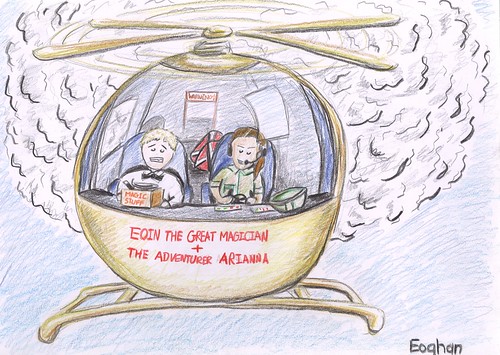 There was a boy called Eoin and he was a great magician. He was really good at school and got full marks in all his tests. He really liked maths. He loved to read.

His best friend was Arianna. She was an adventurer girl. If animals were hurt Arianna could look after them. She loved the rainforest.  They both made a great team.

Eoin’s greatest wish was to compete against the greatest magicians of all time.

Arianna just had her birthday. She used to be eleven but now she’s twelve.

Could you be my assistant for my magic tricks?’ said Eoin.

There was going to be a really big competition for really good magicians next week.

‘If you come with me then you’ll get some practice,’ said Eoin.

The competition was in The North, really far north. They got in a bus to the airport and then they flew in a helicopter. It was a golden helicopter!