The Adventures of Karty and the Fast Hedgehog 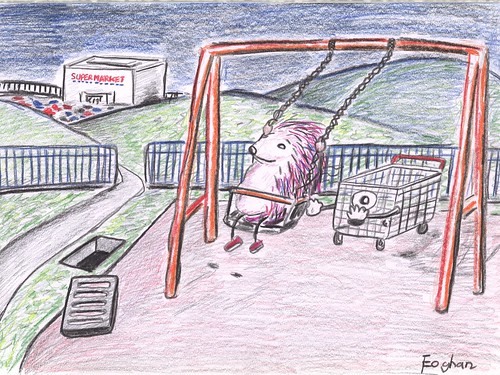 Once upon a time there was a shopping trolley called Karty. He had lived in the sewers for a long, long time because a human had caught him and thrown him into the sewer.

Karty had grown arms and a big eye because of the toxic waste in the sewer. He was afraid of supermarket workers because they might bring him back to the supermarket.

Karty’s best friend was a hedgehog called The Crazy Hedgehog. This hedgehog had two speeds, slow and fast, and they were purple.

The two friends met in the sewers when the hedgehog was collecting food. They bumped into each other and they started talking and became friends. Then they went to the park to play for a while on the swings.

One dark windy night, the friends were playing on the swings. Karty was pushing Crazy really, really high.

‘I have a wish,’ said Karty in an excited voice. ‘I want to be able to turn into a human and change back.’

‘That’s my wish, too,’ said Crazy Hedgehog in a loud, fast voice.

Karty said, ‘Let’s go and visit the wizard of far, far away. He might be able to help us.’

Hedgehog said, ‘That’s super far away. That will take us one hundred days and one hundred nights…”