Length of time at Fighting Words:
Working since August 2018 & volunteering before that

Tell us the story of how you came to work for Fighting Words.
As a person who moves around a lot (I’ve lived in Wisconsin, Virginia, Washington DC, Atlanta, New Orleans, Edinburgh, Denver, Los Angeles and Belfast), one of my favourite things about Fighting Words is that it’s part of the International Alliance of Youth Writing Centres. There are magnificent places like this, and people doing this mind-blowing work, in five of the nine cities I’ve lived in. (You can get a passport and keep track of all the centres you’ve visited. Hannah and I are planning a very big road trip if you want to tag along…) I studied history and literature at university in New Orleans. Just before I graduated, Dave Eggers started the very first youth writing centre in the alliance, 826 Valencia in San Francisco. I remember thinking Okay, I definitely want to work there someday. And 15 years later, by some freaky magic, I did – but in Belfast?! I was one of Glenn Patterson’s PhD students in creative writing at Queen’s, and he got me involved in Fighting Words when it was only a tiny new project here. I started as a volunteer mentor – and did some theatre workshops with Write Clubbers too – before I started working behind the scenes.

Describe a typical day in your role.
Behind the scenes there are :::elaborate trumpet fanfare::: …mainly spreadsheets, to be honest. Keeping track of invoices and payments, funders and grants, project budgets, governance tasks, shopping lists – all of these organise my days into rows and columns. It’s very satisfying to know that this brigade of Excel documents and endless march of e-mails are what keeps the magic carpet in the air, so to speak. Some days I’m making sure our files are secure and organised and up to date; others I spend mostly on hold with the bank or HMRC. I also co-coordinate our scriptwriting projects for teenagers. When there’s a project on (like the Right Twig or the Screenwriting Mini-Academy), I can also be found planning writing workshops; inviting fellow theatre and film artists to join us as guests; or sitting in a Playwright Club meeting on Zoom, reading the sound effects from the latest draft of a radio play written by a 14-year-old from outside Ballymena. Bang! Zoom! (Just kidding, they’re much more sophisticated than that.)

What has been your proudest achievement or favourite moment while working with Fighting Words?
Outside of Fighting Words, my other work involves being a dramaturg – helping playwrights and other theatre-makers develop new scripts and performances. It’s been completely fantastic to bring this part of my work to the writing programme at Fighting Words. I’ve collaborated with brilliant folks in Dublin and London, with the Lyric, Riverside and Playhouse theatres, and with the Nerve Centre to create four in-depth scriptwriting projects for 14- to 19-year-olds. Supporting these writers while they learn the ropes of writing scripts for stage, radio and film is exhilarating and humbling. The writers are witty, smart, curious about the world, generous and humane. Most of them were writing their first-ever plays. My favourite moments are when the professional creative team suddenly forget they’re working with teenagers, and it’s just a room full of artists making new plays together. Because, really, it is.

Not many people know this about me, but...
I also work a lot with Accidental Theatre, the home of Belfast’s only Book Bar. (Hmm, it’s no secret that I love theatre and books. I should try harder…)

My last name is Greek. The second capital D is because of a typo in the Chicago phone book in the 1920s. My great-grandparents liked it and kept it. Spelling is relative & immigration is amazing.

My mum is a choral musician, my dad is a journalist, and my brothers and dad all play the drums. So I’m most at home in cathedrals, newsrooms, and noisy gigs.

One August day in New Orleans, I ate fried chicken in the same restaurant as President Obama – though sadly not at the same table. It is also the world’s best fried chicken.

My partner Tom and I just adopted a lurcher called Athena. She’s two years old. Indoors, she’s like a sweet old lady resting on the couch; outdoors, she’s like an Interpol agent hot on the tail of a Russian mafia fugitive. Athena is my hero. Whenever I’m not fighting white-collar crime, I want to be napping or snacking. 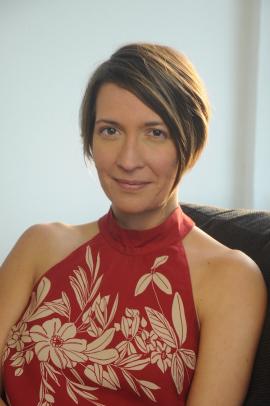