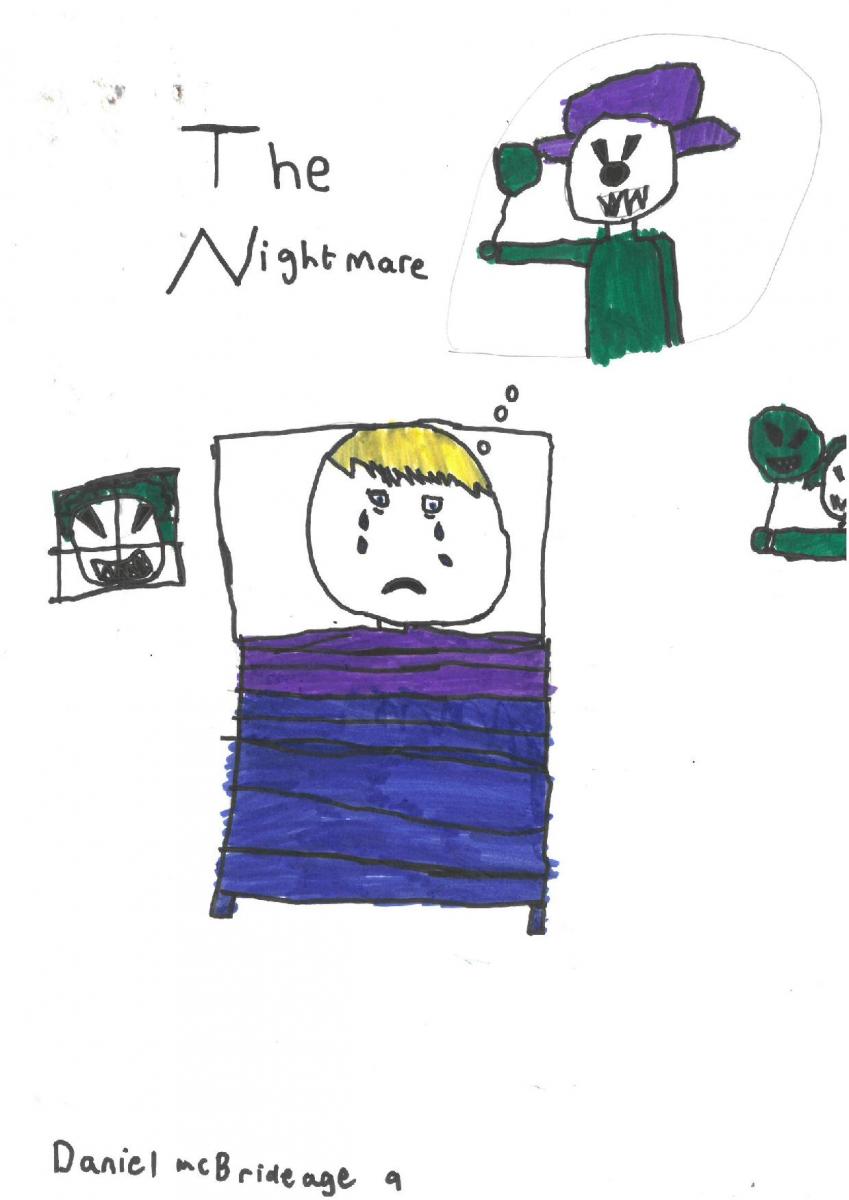 On a summery day, there was a boy who was pedalling along on his bike. Suddenly, his phone dropped out of his pocket and slipped into the lake beside the cycle path.  He got off his bike, went down to the water’s edge and couldn’t believe that someone else was there!

‘Hello,’ said the mysterious man. The boy walked nearer to see who it was. It was a hideous clown, so hideous that the boy passed out.

When he gained consciousness some time later, he was very confused. What has happened? he thought to himself.

‘AHHHHHHH!’ he suddenly realised that he had been kidnapped. He woke up, tied in a chair with the clown staring at him.

‘LET ME GO!’ he shouted angrily.

‘NO!’ said the evil clown. The boy began wriggling in the chair only to wake up and discover he was wriggling in his own bed. Thank goodness! It was only a nightmare!

When the boy was up and about the next morning, he went outside. There was a balloon on the road. Oh no! he thought to himself, when you usually see a balloon, there is normally a clown about.

The boy ran back up into his room and locked the door. He checked his balcony and yes, outside, he could see the clown! He immediately called nine nine nine. The clown spotted him looking over the balcony and began making his way into the house. Just then, the police arrived at the boy’s home. The clown was coming into his room but realised the police were after him, so the clown jumped out of the window and he ran away.

The day after all this adventure, the boy was super cautious and kept a really close eye on the road. If he were to see a balloon at all, he would think back to the clown. That night, he was lying in his bed when- THUMP! - there was someone downstairs. He got really scared but bravely he went and looked downstairs. Oh no, the clown was there. It was like he was living out his nightmare. He did not want to feel scared in his own house any more so he told the clown to get out. He showed he was not scared of the clown anymore.

He picked up a baseball bat as a weapon and he said, ‘Get out, or this will get really bad for you!’ This time, it was the clown that got really scared. He didn’t know whether to scare the boy or run away. As he wasted his time trying to make up his mind, the police had arrived and arrested the clown. The clown never terrorised anyone ever again.