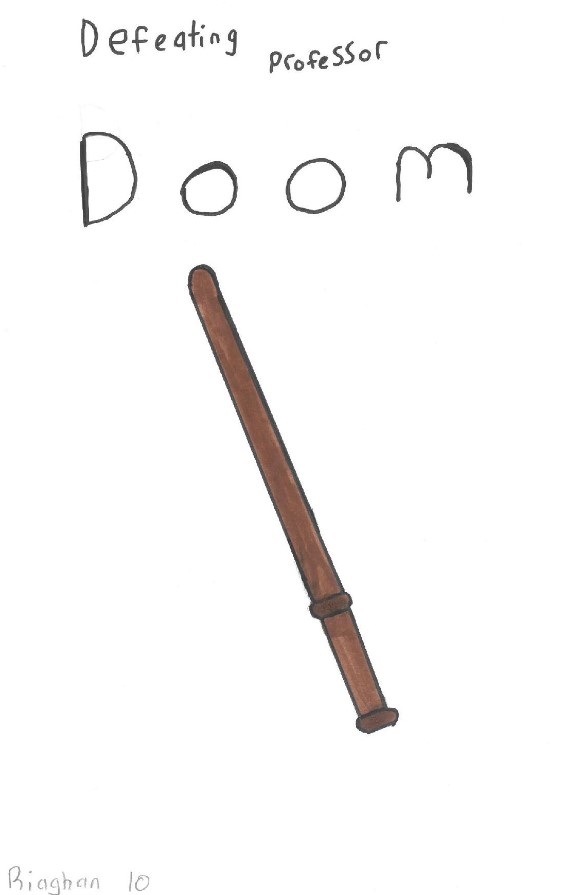 Inspired by the Harry Potter books by J K Rowling.

Once there was a wizard called Riaghan. His best friends were called Dara, Ashley and Orla. They went to a magic school called Wisdom and were in a house called Ellipsis. In Ellipsis, they made friends with twins called Freddie and Georgie; they also made friends called Lana, Niall, Eugene, Hilary and Jeanny.

In Wisdom, the headmistress was called Professor MotorBike. Riaghan, Dara, Ashley and Orla all loathed a teacher called Professor Doom because he gave them detention all the time! Professor Doom favoured the house he was head teacher of, called SnakeBite. SnakeBite and Ellipsis never got along. It was always a competition with SnakeBite!!!

Professor MotorBike answered, “I had to fire him.”

“Why?” the friends all asked.

“Because he has been using bad magic called The Dark Force which is very dangerous and all the evil witches and wizards use it,” Professor MotorBike explained, “and we need people to stop him. Myself and the other teachers think you and all your friends would be able to defeat him.”

“Yes we can, we can do it,” chirped Orla happily.

“Of course we can!” Dara boasted.

“Yes, I believe in you,” agreed Professor MotorBike.

Off they went running until they found him (Professor MotorBike gave them a map of where he was.)  Sure enough, there he was, torturing people.

“STOP!” yelled Riaghan. Eugene and Orla put a protection spell on the people that were getting tortured.

“Fine! Then I’ll torture you instead!” Professor Doom said threateningly.

“BLASTIO!” yelled everyone. Professor Doom went blasting into space at a hundred million miles per hour!

“We did it!” Orla cried happily.

“I told you we would,” boasted Dara.